*Due to the current circumstance, all travel by Innovation PEI employees has been suspended until further notice.  Many upcoming events have been canceled, postponed, or rescheduled.  If you are unsure of a previously posted event, please contact one of our staff at (902) 368-6300.

Do you have an upcoming event that you think our community should know about? Fill out our Event Submission form so we can share it with our valued clients and partners.   *Subject to approval.

The economy of Prince Edward Island is driven by our instinct for hard work and entrepreneurial spirit. The result is a vibrant business environment, a stable labour force and a great place to live and operate a business.

Small Business Week is a celebration of the energy and efforts of entrepreneurs here on the Island and across Canada.

For a listing of events and/or participating partner and organizations, please visit our page www.innovationpei.com/smallbizweek2019 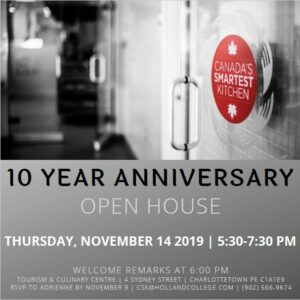 **Option to stay for Q&A and networking until 4pm

In the Boardroom of the Rural Action Centre.

Facilitator Maureen Kerr of Kerr Consulting, has provided social media training and consulting services since 2007. She manages social media for many Island businesses and organizations.

This workshop will include – Facebook marketing tools, setting up a business page, capturing potential customer’s attention and how to add administrators to a page.

Come out and learn how to grow your business through marketing, networking and advertising on Facebook!

Join PEI Business Women’s Association for Your Business Blueprint, a workshop for aspiring entrepreneurs who have a business idea and now want to get it on paper.

A business plan can be a key tool in helping entrepreneurs assess feasibility, evaluate direction and, in particular, attract external funding and investment. This workshop will outline the common requirements of a business plan and the resources available to help you write it.

This workshop will be offered by Mary Lou Bassett. Mary Lou is the Business Development and Membership Officer of the PEI Business Women’s Association. She is an entrepreneur with over 20 years experience in the hospitality, skin care and property management industries. She recently completed her Executive MBA from the University of Prince Edward Island. Mary Lou is conversant in English, French and Arabic and serves as an advisor to help PEIBWA members solve business-related problems. Mary Lou also sits on the Board of Directors for Habitat for Humanity PEI and says she has honed her negotiation skills with a lot of help from her three children.

This event is free to all PEIBWA members and $25 +HST for non-members. Spaces are limited so register early!

Read more
Categories: Community Events Tags: Business Women pei PEIBWA
Mar
10
Tue
2020
FOODEX Japan 2020 Trade Show – Cancelled
Tickets
Mar 10 – Mar 13 all day
Cancellation of FOODEX JAPAN 2020
Dear FOODEX JAPAN exhibitors and visitors,
Japan Management Association, the organiser of FOODEX JAPAN 2020, has officially taken the decision to cancel the event, originally scheduled to be held at Makuhari Messe from March 10 – 13, 2020.
This decision has been made based on the announcement of the Japanese government on February 26th at 1pm; The Japanese government requests event organizers to cancel huge events held in Japan to prevent further infection from the Coronavirus (COVID-19).
For more detailed procedures, we will inform you shortly.
We appreciate your support and understanding.
Yours sincerely,
February 26th, 2020
FOODEX JAPAN Secretariat

Japan has the world’s third-largest economy. With a population of over 126 million, Japan is a net importer of agri-food and seafood products. In 2018, Japan’s food import reached over $90 billion CAD.

FOODEX Japan is the largest food and beverage show in Asia. It is the gateway to Japan as over 80,000 qualified Japanese traders, wholesalers, retailers and food service buyers will attend. It is also a gateway to Asia. Over 10,000 professionals from Asia and around the world will attend it to learn about the industry trend in Asia.

Read more
Categories: Export Development Tags: Food Seafood Trade Show
Apr
8
Wed
2020
POSTPONED Minister’s Seafood Symposium – Supporting our Fishing and Aquaculture Sectors @ Delta - Prince Edward Island Convention Centre
Tickets
Apr 8 all day
Minister’s Seafood Symposium – Supporting our Fishing and Aquaculture Sectors
Date: April 8, 2020
Where: Delta – Prince Edward Island Convention Centre
Contact:  Department of Fisheries and Communities
Phone: 902-838-0910
email: DeptFC@gov.pe.ca
The Department of Fisheries and Communities is holding an industry-wide learning and networking event to bring together participants from all facets of fishing and aquaculture.
“Everyone with an interest in the future of fishing and aquaculture should set aside April 8 as a chance to meet with their peers and with experts and explore how we can move this industry forward together,” said Fisheries and Communities Minister Jamie Fox.
Talks on science, market influences, marine safety, public trust and a series of informative breakout sessions will provide for an engaging day. A Minister’s Seafood Networking Reception for networking opportunities will cap off the day at the Culinary Institute of Canada, 4 Sydney St, Charlottetown.
Cost: $30 (industry), $50 (other)
Includes lunch, coffee breaks, and reception
More information and registration details will be provided soon.
Read more
Categories: Export Development Tags: Seafood Trade
Apr
21
Tue
2020
CANCELLED – Seafood Expo Global Trade Show
Tickets
Apr 21 – Apr 23 all day

Conveniently located in Brussels, Seafood Expo Global/Seafood Processing Global is the world’s largest seafood trade fair. The fair features more than 2,007 exhibiting companies from 88 countries. If you are a professional seafood buyer, do not miss this one-of-a-kind opportunity to meet and do business with seafood suppliers from every corner of the globe.

The expo will take place at the Boston Exhibition and Convention Center this September 2020, with an exhibit hall open on September 23rd and 24th, and a conference program that will start on September 22nd. The September dates were carefully chosen in consideration of the recent escalating situation with COVID-19, the venue availability, as well as feedback from customers and high-volume retail and foodservice Key Buyers from North America.

China is the World’s largest and fastest-growing seafood market. More than 33,000 seafood professionals from around the globe visit CFSE annually to forge relationships and expand their presence in this dynamic market. Contact Innovation PEI to join us at the 2020 CFSE.